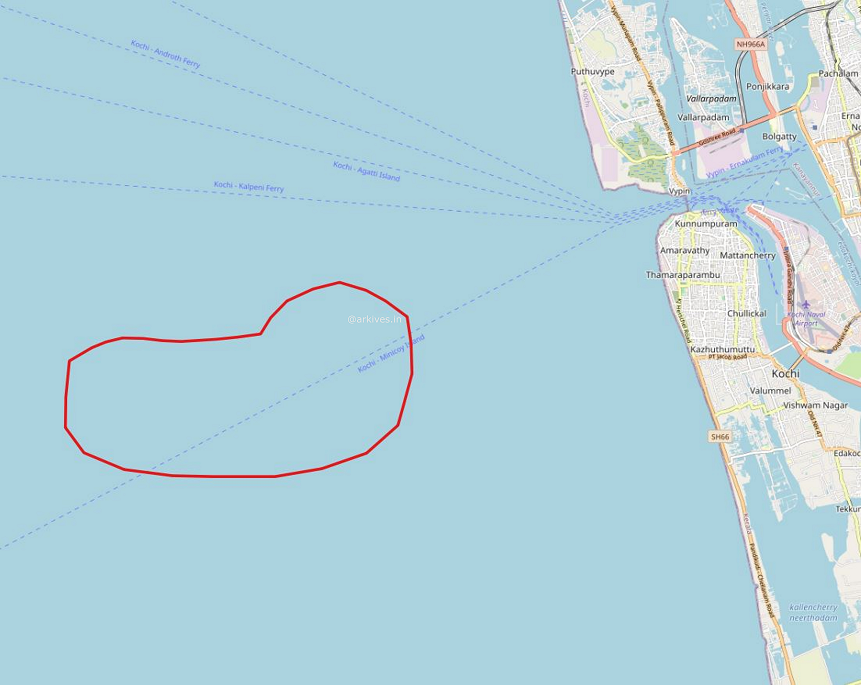 Earlier this month, there were reports flooding on the new channels, online media and the wildfire social media. In fact it was initiated there in social media itself regarding an island formation near the Kochi coast of Kerala. And some went beyond and gave the island a name as well - “Payarumanni Island”, which translates as “Bean Island” in malayalam. The kidney bean shape might have prompted the person to name it that way.

If I am not wrong, the birth of this controversial island started when some self proclaimed expert(I don’t want to quote the name) added a post in social media that there is a sand bed formation at about 7km(at about 3.7 nautical miles) from the coast of Kochi. The formation was visible in google maps satellite view and google earth the person added. The person claimed that sand was eroded from the Chellanam, a small coastal village in the coast south of Kochi. Chellanam was recently in news for the increased coastal erosion and rapid change of shoreline. The “Island” has around 8.km average length and 3.5km average width in the shape of a kidney bean. Later the post was blindly undertaken by the media of all kinds. Asianet, The news minute were among the early birds to ping with the matter. As usual strategy of the media they reached out to the Kerala University of Fisheries and Ocean Studies (KUFOS), Kochi, the local fisher folks etc. to get comments on it. Some media had their own findings as well, fortunately I didn’t find any route map of the deposited soil infographically represented.

A couple of days back the initiator again appears with new findings in his social media post, estimating the total size and volume of the so formed sand bed. He also has a plan for how to reuse the sand by removing it from there - building a 15m high sea wall with that sand in the Chellanam coast. His big calculations were deceiving for any common man especially the local fisher folks of Chellanam. In between some gave the name ‘Payarumanni Island’ to it and google maps even published it (after validation)!

The so called island in the google maps satellite view. You can see the name marked as well.

If you analyse the Google maps satellite view, it is evident that the land masses have a high resolution satellite imagery and the Ocean after a 1.3km (approximate) is replaced with ocean bed replica textured images. In the case of an island, only the island land mass with a standard buffer area will be available in high resolution image, the rest will be the same ocean floor.

OpenStreetMap showing the island area and Ferry routes from Kochi. It falls over the Kochi-Minicoy Ferry Route.

Here in the case of our ‘island’ google satellite view instead of ocean bed texture, high resolution imagery has been replaced. This might be due to the errors happened in the backend algorithm of Google maps. The high resolution image creates an illusion of an island as it stands out from the surrounding texture. Google earth as a temporal feature where you can go back to the time and see how that area looked like. If you use that option and travel back to 2020, 2019 or 2018 images, it is clearly evident that there is no such land mass formation.

You can see a rock-like feature and a ship nearby.

Kochi is not the only case that has happened in google earth, if you search the entire globe you can see many such places. Here is another place west of the Kyaukpyu Airport, Myanmar. It is easy to identify what a landmass looks like or a ship looks like from the above image. Seeing multiple features (ships) closeby regularly might have triggered the google algorithm to classify it as a landmass and acquire the area’s high resolution image and replace the ocean bed texture. Our area has a high frequency of ship movement as its very close to one of the country’s busiest ports and shipyard. It is also on the Kochi- Minicoy ferry route.

Landsat 8 is the latest Earth Observatory satellite in the Landsat program and is the longest-running enterprise for acquisition of satellite imagery of Earth, a joint NASA / USGS program. The image is freely available and you can see even in google satellite view the Landsat true colour images are used in many areas. A visual interpretation on the temporal images before and after Kerala floods 2018 has been given below.

In both the images there is no sign of such an island in the area.

Verifying with other high resolution satellite sources can also help us in finding out the truth. Here I have used microsoft provided Bing imagery, Maxar Technologies’ Maxar Premium layer, and ESRI provided base layers. All are available for OpenStreetMap editing for free, hence you can use it along with their time of acquisition also.

It is clear that there is no sign of an island in any of the abobe high resolution images.

The spatial light attenuation and water clarity can be estimated from diffuse attenuation coefficient at wavelength 490 nm (Kd 490 ). Landsat 8 data of the area acquired on 2021-02-14 was used to obtain this using the NASA’s SeaDAS. The Kd490 gives the turbidity of the water, which can also be a pseudo indicator for the underwater presence of sand bed. The entire area is having more or less uniform values which proves there the presence of under water sand bed wrong.

We can notice there is no change in the turbidity values of the region and its the surroundings.

GEBCO_2020 Bathymetry data 3D visualised. (The view is from Lakshadweep islands to Indian mainland). The red color polygon is the area of the claimed island. On contrary We can also see a channel like depression extending from the area from Kochi coast to the Lakshadweep side depression.

We can see the West coast of Indian subcontinent has a flat buffer-like area throughout the coast in this Ocean bed visualisation by Bhuvanamitra, a geospatial engineer.

For a close look an area is subsetted and visualized. We can see there is no sudden increase in the bed floor of Arabian Sea. The claimed area is encircled in red.

Another angle of the same visualisation.

The island is just a visual artefact that occurred as a result of the anomoly in the image processing algorithm of google image, which is quite normal. I have done all these analyses just to show the different ways by which you can validate the facts. Normal public can validate with simple steps like my friend Raj Bhagat Palanichamy, a geospatial expert at WRI India said.

Multiple news outlets published an article based on a social media post that a new underwater island has been spotted in Google Maps near #Kochi. It is a visual artefact and not an island. Read tweets below

Seeing his tweet I thought of adding something more to reinforce that. (Read all four tweeets in the thread to see his explanation.)

Just zoom in to the location and you can see many ships passing over the area. Considering the size of the vessel visible in the picture, there is no chance of having a sand bed beneath it. Also we found no embankment in the area even for a small height in the bathymetry data. Even if there are some deposits as said, which are not visible in the bathymetry, those will not be visible in the google maps optical data also.

Marine vessels in various locations in the area zoomed.

I request all our media friends to please verify the data and break the news and those who have done stories already on it please take some time to correct the news and dissipate the correct news to the public. I see The Wire has done it with a report.

After writing this explainer, Ark Arjun received a lot of questions. He has compiled an FAQ out of it. Read it from here.